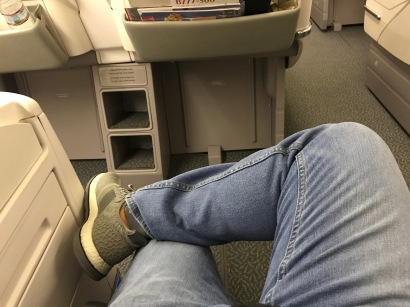 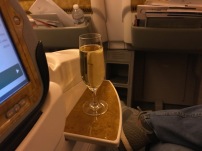 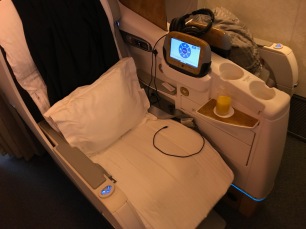 I had a brief glimpse of what it must be like to be rich and famous on the 9-hour Emirates Airlines flight from Newark, NJ to Athens.

I didn’t get that free first-class upgrade everyone dreams about, but I was offered an 75% discount on a seat in business class a couple of days before the flight, and I took it.

So, I became that annoying guy who got to board first and settle in with my flute of champagne watching all the heathens trudge back to economy class to be on the other side of the curtain when they closed it shut.

Then, I had my pre-dinner beverage, an Old Fashioned, before having my three-course meal including spinach soup, rack of lamb, and a chocolate/caramel delice on a white-linen tablecloth at my seat with real silverware, of course.

After dinner, a bedtime whiskey, then my seat reclined all the way flat for bed. When I awoke, French toast was on the docket for breakfast while I watched Gary Oldman’s Oscar-winning performance in “The Darkest Hour.”

They also gave me a men’s shaving and amenity kit and WiFi was available the whole flight.

So, all in all, it was a very cool experience just to say I got to do that once in my life and very much worth the extra money spent. 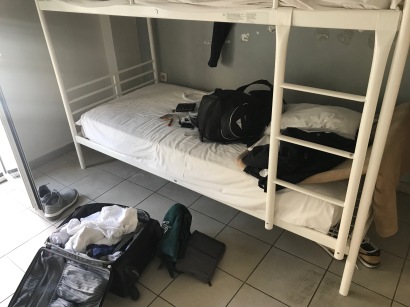 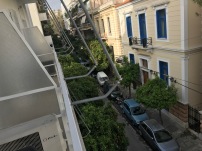 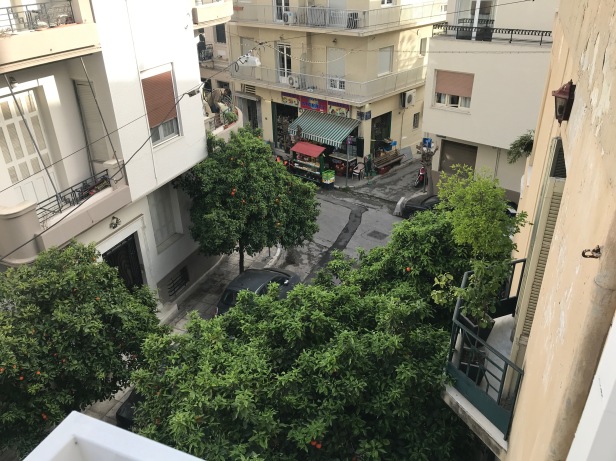 This is my counter balance to flying international business class to get to Athens. I know this isn’t everybody’s cup of tea, but if I’m traveling by myself, I’ll look to keep costs down by staying in a hostel.

Essentially, it’s a dorm room. Bunk beds, shared bathrooms, and little for private areas—so I get why this doesn’t appeal to many people. But, it’s really cheap, my bunk mates are from Belgium and Germany, so I’m gaining perspectives from people worldwide, and my balcony view includes a street full of orange trees. That’s right, if you look hard enough, there are actual oranges in those trees! Can’t get that at the Drury Inn. Besides, if you travel and spend most of your time in the hotel, you aren’t doing it right.

I’ve stayed in a number of hostels and have found them to be safe, full of interesting people of all ages, races, and nationalities, and those working there are the ones who really know the hot spots and where to go in town. Did I mention that hostels are really inexpensive? 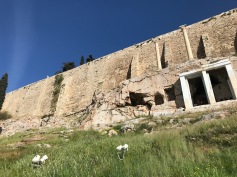 The Acropolis is the name of the entire complex on top of a hill in Athens that contains several historical buildings. The most famous and iconic one is the Parthenon, a temple dedicated to the goddess Athena. She was so revered, they ended up naming the whole city of Athens after her. Construction and decoration of the Parthenon was completed in 432 BC. Then, in 1687, it was bombed by Venetians during The Great Turkish War causing significant damage. In subsequent years, leaders decided not to rebuild it, rather to leave it as a vow to never forget what happened. Preservation efforts continue to this day.

As I got there when they first opened this morning, I caught Greek soldiers singing their national anthem as they were raising their flag for the day. That was a cool moment. Oh, and the view of Athens from up there…it was magnificent! Plus, that early in the morning, I almost had the whole place to myself before those pesky tourists starting showing up! 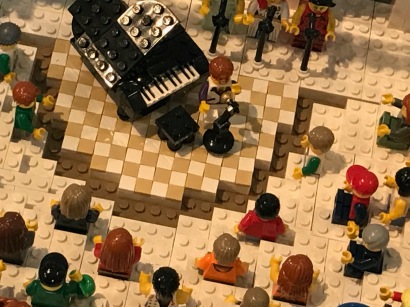 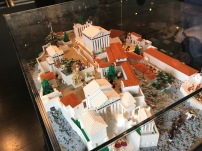 Of course the Acropolis Museum would have a Lego Acropolis. It even has a Lego Elton John (not kidding) because the real Elton John actually performed a concert in the ancient Odeon of Herodes Atticus amphitheater on the south side of the Acropolis in 2000.

Holy cow…fighter jets flew over Athens at noon today. The unexpected noise scared me half to death. I was on my balcony and managed to catch the last one on video.

As it turns out, the military is just practicing flight patterns for the Greek Independence Day parade on March 25. #Whew

Here’s some photos from the stadium where the first modern Olympic Games occurred. The track is only 185m long (a track today is 400m), there’s a tunnel leading to a room with actual Olympic torches and posters for all of the modern Summer and Winter Olympics, there were special “box seats” for dignitaries back in the day, marble tablets indicating where all the modern Olympics have occurred, and a pretty neat view of the Acropolis. It’s pretty awesome to think about the history that has happened here! 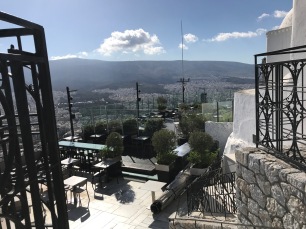 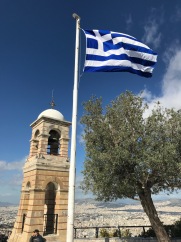 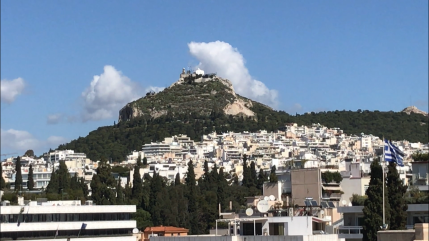 On top of Mount Lycabettus, there’s a small Greek Orthodox church and a big Greek flag. Getting to the highest point in Athens wasn’t as hard as I thought it would be, but did require a solid uphill walk via switchbacks. However, the view was totally worth it!

The hourly changing of the guard ceremony at the Tomb of the Unknowns in front of Greece’s Parliament building has got some high-stepping to it! After the new guards are in place, they actually encourage you to take photos with the stoic-faced soldiers (at a distance, though)! 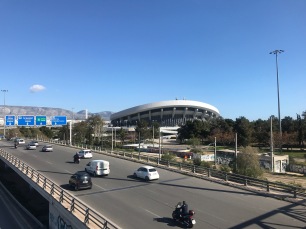 Peace and Friendship Stadium is the arena where indoor volleyball was contested in the 2004 Olympics in Athens. I tried to walk around the whole building to find a way inside to take some photos (I did find the “Officials Entrance” though), but a non-English speaking security guard told me (based on the sternness of his voice) that I couldn’t get in. Apparently, displaying my passion for volleyball couldn’t overcome the language barrier. Or trespassing laws, I guess. So much for Peace and Friendship. 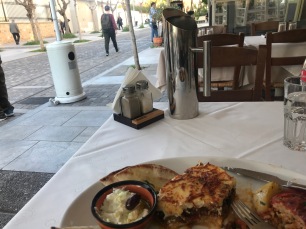 I took a walking tour of Athens on Monday, and my tour guide, Martin from the U.K., highly recommended this restaurant which is literally around the corner from my hostel. They have a tourist’s Greek sampler dish for only 10 euros (wine included!) containing pita bread and an olive oil/yogurt/cucumber spread, beef gyros (actually traditionally served alongside the bread, not in it), moussaka (meat, eggplant, potatoes, and cheese), and boiled tomato stuffed with wild rice. What a great meal plus being able to enjoy it outside cafe-style watching the world go by was an added bonus. Needless to say, but Weight Watchers is also on vacation this week. 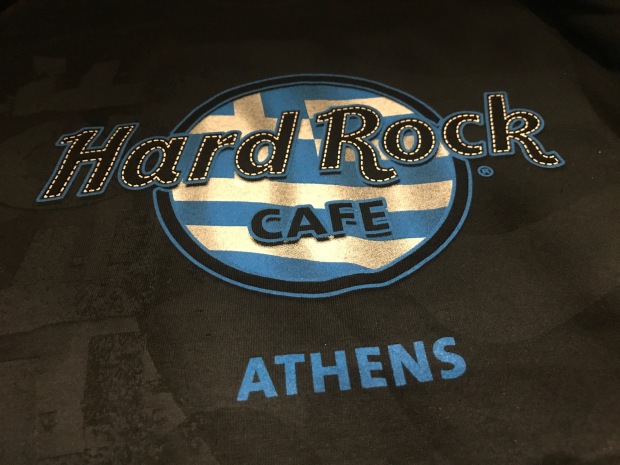 On foreign trips, my general rule is to not go to places that I could go to somewhere in the United States. But I also allow myself one pass, so I elected to use it for this trip at the Hard Rock Athens. Some people may say the Hard Rock is outdated, but I may or may not deny that tonight’s 2-for-1 drink specials may or may not have contributed to my decision to come here.

Lambros, the Greek custodian who cleans my classroom, actually gave me the idea to visit Athens over spring break. When I told him I found a good deal on airfare and was going, he said that I also HAD to go to a Greek island. The most popular ones, Santorini and Mykonos each were over half-a-day away by boat, so he suggested Aegina Island, which was only an hour or so by ferry.

For only 16 euros round trip, I caught a big ferry boat that transported people and vehicles to and from the island and had an extremely relaxing day. The beaches are usually the main attraction of the Greek isles, but the temperature is in the 60’s this time of year, so that was out.

There were a number of souvenir shops and cafes. I got lunch of a huge club sandwich, fries, and a teeny, tiny espresso at Pitsi’s coffee & food. There are mopeds everywhere—even 80-year-olds were cruising around on the narrow streets! I visited an Aegean archeological museum and historical site. I read a book on a bench near the port and watched the waves roll in. Lastly, when you go to Aegina, you have to get a bag of pistachios. Apparently, it’s the law here.

So, Lambros…thanks for the pointers! We can have some Greek pistachios when I get back.

Forget the Acropolis, this neighborhood sand volleyball court that has been neglected over the years might be a more significant archeological find! The evidence suggests that at one time some serious volleyball must have been played here. Only seasoned veterans would have insisted to play with antennae on the net. 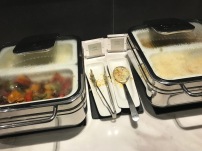 One of the most stressful aspects of traveling can be figuring out how checking in and security works in unfamiliar airports, especially outside of the United States. So that’s why I got here four hours before takeoff.

With that being over, in the remaining time I can use a perk of one of my credit cards to gain free access to airport lounges worldwide. So, I’m now relaxing and waiting for my flight in the GoldAir Handling Lounge complete with hot food, a full bar, snacks, and a quiet place to chill before dealing with any upcoming chaos at the gate. 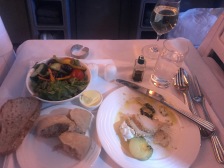 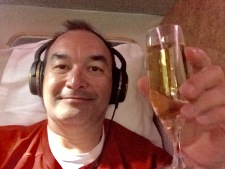 Unbelievable! I got red flagged as they scanned my boarding pass getting on the Emirates flight from Athens to Newark. I was scared and thinking the worst as they pulled me aside, only to be told that I was receiving a complimentary upgrade to business class…the same upgrade that I paid for on the way to Athens. Apparently, I have used up all my good luck on this trip. It’s only downhill from here.