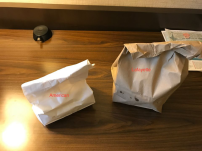 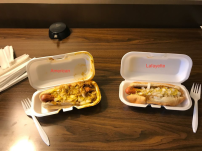 In Kansas City, we have the Arthur Bryant’s vs. Gates barbecue debate. In Detroit, the big food rivalry involves coney dogs: hot dogs with chili, mustard, and onions. Back in 1917, Gust Keros came to town from Greece and opened American Coney Island restaurant featuring coney dogs. A few years later, his brother William came here as well, but opened up a competing restaurant named Lafayette Coney Island RIGHT NEXT DOOR. So, ever since, loyalties have been divided and can run pretty deep amongst people in Detroit. William sold Lafayette 25 years ago to his employees while American is now owned by Gust’s daughter, so the sibling rivalry doesn’t directly stand anymore, but the story still prevails and everyone in Detroit has shown an allegiance.

So, I had to go to both places and pick a side. After careful consideration, I am now a Lafayette man.