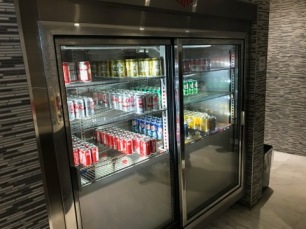 One of the perks of a credit card I use is access to some airport lounges on a card called Priority Pass. I was able to get my mom, Murphy, and I into the Korean Air Lines Lounge in the International Terminal at LAX on the way to Japan.  Free food and drink, plus it beats fighting the crowds for chairs at the gate!

My mom, Murphy, and I are on our way to Okinawa, Japan!

Murphy is enjoying his first in-flight dining experience. My mom, on the other hand, is all business.

The in-flight individual entertainment center had an all-Eagles, all the time station. Headphones in, hit shuffle, repeat, and life is good!

It’s a good thing Murphy wasn’t five years younger on this trip. It would be impossible to tear him away from this park across the street from our hotel! 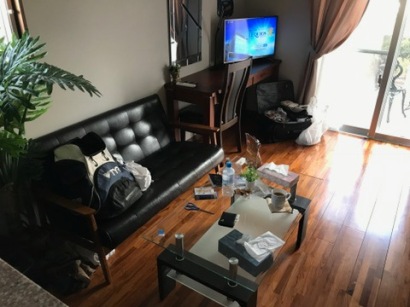 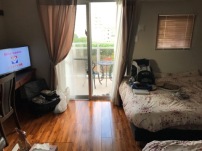 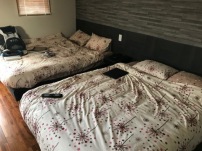 Here’s our little apartment we stayed in for the week! 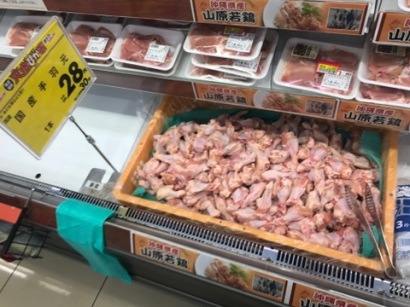 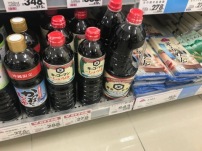 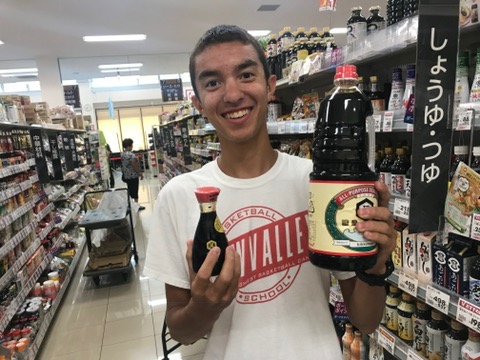 Our first venture into Japanese culture was to the grocery store. We learned what the Japanese value versus what Americans value. Apparently, soy sauce (which is pretty healthy and used a lot on rice) is high on their priority list since they sell it in two liter bottles! Of course, we sell soda in two liter bottles, but there’s none that size to be seen here! Also, a super size bag of Cheetos here is smaller than even a normal size back home. Raw unprotected buffalo wings for the taking was an interesting method of distribution that we noted as well. We’ve only been here about 12 hours, but we’re already getting an education!

FUN FACT: When you’re in Asia, the globe icon for Notifications in Facebook also turns towards Asia. #LittleThings 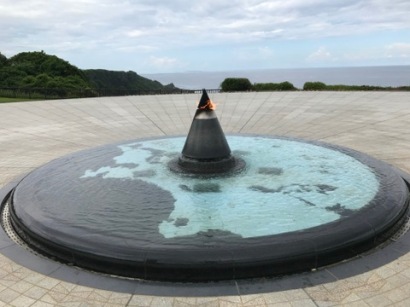 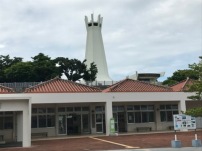 Quick history lesson: The Battle of Okinawa was a key offensive during World War II that lasted 82 days in the spring of 1945. Over 250,000 lives were lost–about half military (American and Japanese) and half civilian (almost all Japanese). About 90% of the buildings on the island were wiped out. It was a fierce battle resulting in the United States taking over the island of Okinawa to use as a staging area to invade mainland Japan until the decision was made to use atomic bombs to end the war. The U.S. eventually returned control of the island to Japan, but still has Army, Marine, and Air Force bases here.

The photos you see are from the Okinawa Memorial Peace Park–near the site of the conclusion of the Battle of Okinawa. Among the features are the Peace Hall tower that serves as a symbol for peace, the Cornerstone of Peace eternal flame where the fire originated from the sites of where U.S. forces first landed on Okinawa as well as the sites where atomic bombs were dropped to also symbolize peace, and the Memorial Path with marble walls constructed with nearly 250,000 names of all who died during the battle. The park overlooks the southern coastline of Okinawa where the final battles of the offensive were fought.

It’s a testament to the Japanese people that they were able to take a place with such an awful history and turn it into an area now held in high regard for remembrance and peace. It’s quite an awe-inspiring place.

A couple of weeks ago, Murphy took his classroom and pool sessions in Kansas City to become an Open Water certified scuba diver. To complete the training, an instructor needs to certify a candidate doing skills in four real open water dives. So, we thought, why not complete the dives in Okinawa! He passed two of the dives today with flying colors, and I got to go with him. We dove in Blue Cave near Maeda Point and saw beautiful coral reefs and schools of colorful fish. It was dazzling! Two more dives tomorrow, and he’s fully certified like his old man!

Some things, like fidget spinners, are just apparently universal.

This is the entire menu at a shaved ice joint at the local market. Really, though, what else do you need besides shaved ice, beer, and snack food? I can’t think of anything else. 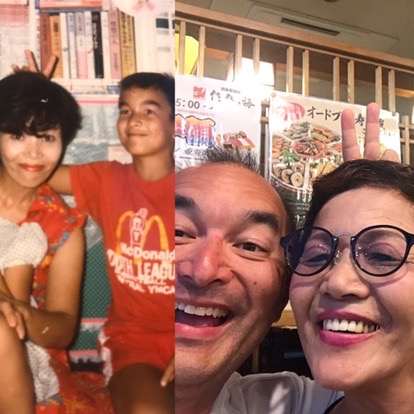 OK, so maybe it is true that I’ve always been a bit rambunctious around my Aunt Yasuko.

Q: Can you tell the difference between the two photos shown here? A: Duh, the one on the right is of an officially certified open water scuba diver! Nice going, Murphy! 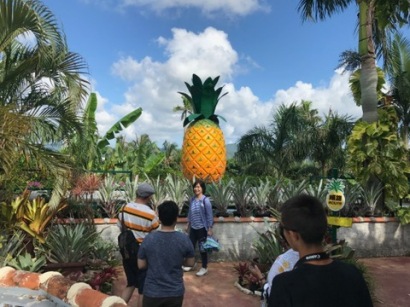 I thought the Spam Museum I went to a few weeks ago was impressive until I visited Pineapple Park in Okinawa, Japan. An entire pineapple garden filled with wildlife, waterfalls, pineapple plants, and carts shaped like pineapples…plus a store with wine, juice, cake, soap, cosmetics, vinegar, and cookies, among other things, all made from pineapples. Yeah, Spam Museum….sorry, but you’re on notice to step your game up. 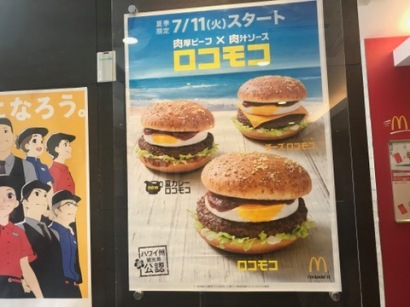 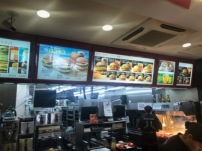 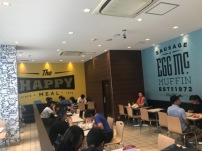 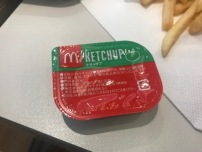 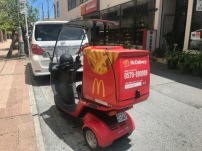 Yeah, I know that we’re violating the traveler’s code by eating at McDonald’s in Okinawa, Japan, but we just HAD to find out if burgers and fries tasted the same here as they do back home. #TheyDo #TheyAlsoDeliverApparently 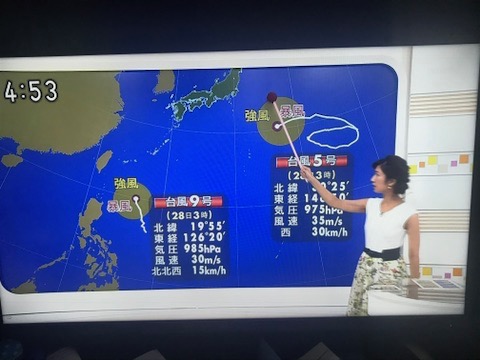 Can you imagine what Kansas City-area weatherman Gary Lezak would do if he could broadcast the weather with this Gong Show mallet-type stylus like this Japanese forecaster?

Panoramic view of this popular lookout point on the west coast of Okinawa, Japan.

These signs are all over the place, but I have yet to actually see a fire hydrant! (Serious answer: they’re actually buried underground where the sign is!)

Heated toilet seats are standard in Japan…not kidding! Those controls on the left actually shoot streams of water from the inside edge of the bowl to assist with….uh, wiping and cleaning afterwards. I haven’t tried out that option yet.

An old SAT analogy statement: Family Mart is to Okinawa as QuikTrip is to Kansas City.

The Japanese LOVE their vending machines. You’ll see them on many street corners. They even dispense cigarettes and beer. 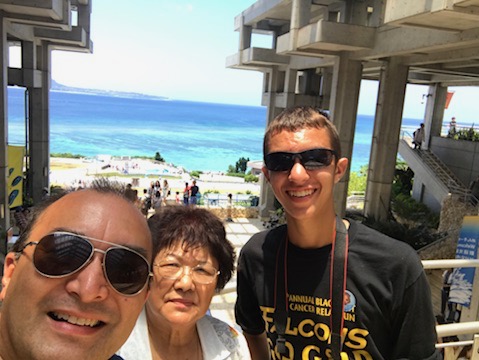 An exterior view of the Okinawa Aquarium…what a view!

Or….maybe if you fixed the handle?

Many people own small pets in Japan, but to put them in bottles to be recycled seems a little cruel.

If I were to open my own hostel on Okinawa someday, my #1 name choice has already been taken.

A special fountain for gargling! The Japanese have thought of everything. 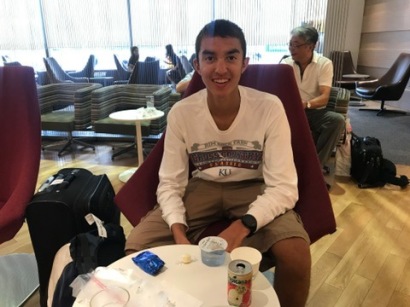 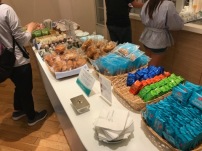 My mom is staying for another week in Okinawa, but Murphy and I have to get back for school and cross country practice starting up this week!  We are in Tokyo on the way home, and we were able to get into the Korean Airlines Lounge for free food and drink and a place to chill out before the 10-hour flight to LAX, thanks to my Priority Pass card I got as a perk from one of my credit cards.

GREAT SCOTT! Forget Doc Brown, Marty McFly and the DeLorean, the time machine already exists! Thanks to the International Date Line, Murphy and I landed in Los Angeles about 6 1/2 hours BEFORE we took off from Tokyo. And we didn’t have to use 1.21 gigawatts in the process. #BackToTheFuture